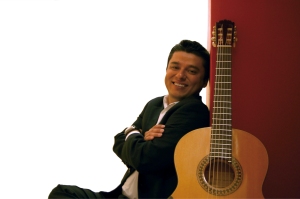 He was involved in music because of the family influence. He starts his musical education at the age of thirteen playing the guitar with his first teacher Javier Acosta Jasso, his cousin.
Hugo finished an undergraduate degree at the University of Guadalajara, with the guitarists David Mozqueda and Hugo Gracián. He graduated at the top of his generation, that’s why he was awarded as «The most outstanding student from the University of Guadalajara».
In 2003 he moved to Germany and finished in 2006 post-graduate studies with world-renowned Canadian guitarist Dale Kavanagh at the Hochschule für Musik Detmold. He performed in Germany in many cities like Rösrath, Münster, Gelsenkirchen, Dortmund, Essen and Detmold as a soloist and also in the Catarsis Duo with the Mexican guitarist Juan Ramón Arceo.
He has participated in numerous masterclasses with recognized/well known guitarists as Joaquín Clerch, Aniello Desiderio, Hopkinson Smith, Pablo Garibay, Johannes Möller, Bruce Holzman, Gonzalo Salazar, Pavel Steidl, Juan Carlos Laguna and Carlo Marchionne.

He founded the music school «Sonatina Musikhaus» with the purpose of bring solid music education to the students in Lagos de Moreno.

In 2014 he will consolidate the Sonata a.c., an art society formed by his students and friends, basically aimed to promote Mexican musicians, musical education, concerts and cultural exchanges between similar societies around the word.

Hugo Acosta has released in 2013 the cd «Music by Antonio Gomezanda and Apolonio Moreno guitar transcriptions» available now in http://www.hugoacostaguitar.com.